Polly dealt with the news of her husband’s illness as she had dealt with most things that threatened to blow her life off course.

She did not think of her ship sinking. Just that the voyage had become more challenging.  She knew that it was too late to avoid this storm, and hugging her knees, rocking in tears in the small hull of her life’s boat would not help, either.

She must draw further strengths from that hidden place inside her which she had so often needed.

And so, Polly reset her course.

She would give up her typing position at the Chronicle. She would work in the kitchen of the pub above which she and Cliff had been living. Their space was little more than a box room. A small bed. Space for their respective suitcases and access to the communal bathroom. The landlord leased out the pub’s backroom. By turns, the drama society, a piano teacher and septuagenarian tai chi ladies (if the weather was inclement) used the space. When the backroom was free, Cliff could use it, when he had the strength.

Cliff had dabbled with photography for much of his life. To him, whatever or whomever appeared on the viewing screen of his old wooden camera became part of some kind of alchemy. Maybe it was the selection process – each image a unique combination of moments, elements, light, feeling, a disorderly assembly in which lay, he always felt, the suggestion of a deeper order.  After his diagnosis, which was pretty grim, he was drawn more and more to looking at life (in the small area he circled) through his lenses.

The pub had never been as full of life as it was in the 3 days when the whole of the primary school filed through for their annual photographs. Cliff was popular with the kids. When he and Polly first came to the town, he took a job as the school gardener and jack of all trades. And word had got out that his dramatic weight-loss was not because of some miraculous new diet. Many of the school photos that year were the most exceptional that the school and the parents had ever seen – the depth of maturity and feeling in the children, their presence, or, as the painfully thin photographer said, it was the kids giving the lessons now.

Polly herself never liked her photograph being taken. It was one of the few things that Cliff asked of her that she would usually find some reason to avoid.  But now was different.

This photograph (above) was taken the week before Cliff died.

Polly had finally relented, seeing the effort that her husband was making to overcome his pain. She watched his shaking hands go about the technical rituals of the art, as his head moved under the dark cloth, searching for focus. The shutter clicked before she was ready, before she had the chance to attempt a smile. But when Cliff emerged from beneath the dark cloth, his remaining strand of hair in a baby’s tuft, his smile was big enough for both of them, for all of the love that they had shared.

Everything is different now.  Or rather, a different version of the same.

The clouds still gather in impossibly beautiful formations. Tree tops still sway. One blade of grass is still imbued with the richness of the world.

The town’s children still miss their gardener.  Their parents still run their fingers over that years’ photographs.

Polly is still sailing on. 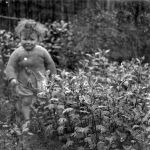