our orbits of light

We are near the beginning of everything.  It’s a little under 14 billion years ago. The newly formed universe has been cooling for 380,000 years and something monumental is happening.

All light has lain trapped behind an immense and impenetrable particle cloud for almost 4 thousand centuries.  But now, in the cooler temperatures, electrical combinations are occurring, and great bodies of a new gas are forming.  Transparent hydrogen opens passages in the dense particle cloud and, in a sequence of astronomically ecstatic of moments, the first photons of brilliant light, finally freed from matter, stream across the immensity of the cosmos.

Everything that was to follow, came from that energy, was born of that light.

For one 60th of a second, silver nitrate crystals on a strip of photographic film, just 35 millimeters wide, react to a short burst of light.  That light reflects from faded wallpaper, a water-stained ceiling and the faces of an enraptured grandmother and (the source of her rapture) her infant grandchild.

Joyce hands off the child to Harry, her equally doting hubby, because the spuds aren’t going to peel themselves.  Janice and Geoff are over for Sunday roast – there are some things that a mother will always do best.

It’s a week later and the canister of film jiggles inside of the shopping bag of Grandmother Joyce as she travels along the high street atop a number 37 bus.   Alone with her musings, her mind wanders.  As the bus shudders away from another stop, she thinks of her longtime friend and neighbour. How’s Glenys going to cope with Alf being laid off an’ all.   It’s not so much the money, they’re okay on that score.  It’s more the grumpy sod being home all day...

The bus takes the curve and without any awareness of doing so, Joyce leans with it, like a hundred times before.  Mustn’t forget the Ajax and Dad’s prunes.  Joyce watches a young lad slump into the seat opposite; she observes his swept back hair, a feigned cool, in defiance of the teenage pimples that still insist on dancing on his face. The boy gazes through Joyce to the moped showroom that is the next step in his grand design.  Joyce folds her hands into her lap and casts a glance down. The fearful thought rises that her arthritic hands may continue to worsen. She looks to the horizon, a place where relief might be, her gaze breaking through the filthy patina of the bus window.

The sun comes out from behind a cloud. Joyce closes her eyes. For a moment, she basks – all her thoughts fall, her sinews unclench. It’s going to be alright.  The cloud cover returns and the bus rumbles on.

Another week forward.  Joyce’s good hand whips the large bowl of cream. It will be the cloud of indulgence that crowns her strawberry-jammed scones.

The front door bangs. Joyce hears Harry stamping his feet before removing his shoes.  She counts – always 4 stomps.  She knows the precise moment he will appear in his socks, and precisely what he will say and do.

Harry enters.  He sniffs, gives a double thumbs up and say ‘scones‘.  Joyce smiles at the familiarity of this man who has loved her for 28 years.

I got your prints, he says, surprising her.

Harry’s face enthusiastically merges with a jam and creamed scone. He closes his eyes and utters something inaudible, in Scone-ish.

Joyce takes a sip of her tea, wipes her hands on her apron and opens the packet of prints.  She smiles and she goes through the photographs, one by one.  A nice one of Dad.  Blurred.  Head cut-off.  Good one of the dog. Glenys, pre-Alf at home.  Janice with the baby. Geoff…

Joyce pauses to bite deeply into the fluffy sweet indulgence of her scone and drinks deeply of the comforting strength of her mug of tea.  Bloody good, she allows herself to admit.  Joyce flips the photo packet open and continues print by print, until she arrives at one and pauses.

She pulls out the photo from the packet and holds it before her, looking at it like it’s an answer to a question she’s forgotten.  What is it about this picture?  She gazes intently.

Her eyes travel over her smile, which she finds pleasing and, natural, but it’s more.

She is rendered as, herself, as much a delighted child as woman.  The blank stare of the child seems underpinned by a wisdom, an ancestral imprint, perhaps.

Joyce’s chair scrapes across the floorboards and she heads into the front room.  She digs through the sideboard cupboard and places the framed print on the mantle. Joyce stands back and admires the image, feeling for a moment that she is made of honeycomb.  She turns back to the kitchen.  Another scone Harry?

As the couple smile and chat, the low winter sun breaks through the gap in the net curtain and shafts of light fall upon this image of grandmother and child. Particles of dust drift along the beam and in the moment, the photo’s meaning and all of the meaning of the world is there.

Just as the first light broke free 14 billion years ago and has not stopped travelling since, so it is with the human heart.

Love is a force which cannot be stopped. 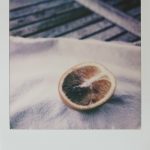 Prev half
Next I believe 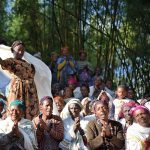