I will stand by you
I have taken the first lash
the second
Others followed,
tearing my skin

I begged the Maza — the unwed men with the whip –
to strike me.
Blow after blow.
I want to prove to you
I will defend you from life’s harm.

Pain is nothing compared to my love for you, Brother

And one day
when
times of trouble, doubt and fear
arrive,
you will remember
me
in this very moment
and how I and your sisters
stood by you

Our skin is your home
our courage is your light,
the scars
a Braille testament of our bond

In the photo, a Hamer tribe woman bears the scars of whipping, the result of the ancestral initiation ceremony that is meant to accompany a boy officially transitioning from puberty to manhood.
Known as the Ukuli, the three-day ceremony includes strength tests and various passages ending in The Jumping of the Bulls: the boy becomes an adult walking on the backs of fifteen bulls.

Nothing would be possible without the incitement, blind faith and rooting from his sisters and female members of the family.

The Hamer people are seminomadic, moving every few months when the land cannot offer much any longer to the people and the livestock.
Numbering ca 45,000, the Hamer continue building their rounded huts whenever they move to their next destination, a task usually carried out by women who work together.
Circle is a recurrent dimension. They sat in circle while shelling and peeling vegetables and I sat with them. They half smiled, made space for me, like an extra bead in the necklace of humanity.
Eventually, they forgot about me.

Century after century, the Hamer have been relying on the soil for their survival, collecting wild honey, growing beans, sorghum, tobacco, coffee, pumpkins (and it is the soil that feeds the livestock).
Hamer’s life is one with the soil and animals, adapting to the whims of nature in an eternally perpetuating ritual, east of the Omo River that slowly runs for almost 800 km from the highlands of Ethiopia to Lake Turkana in Kenya.

A question prompts my lips quite often: And what did you do in this life?
I witnessed love.

Prev the sum of things
Next people are gems 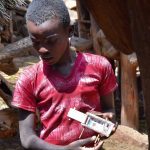